Reason Why Some Black African’s Have Blue Eyes

It’s generally believed that black people don’t have blue eyes.  These strikingly coloured eyes have always been associated with Caucasians.  However, there is a small percentage of Africans born with cerulean blue eyes.

Why do some blacks have blue eyes?

One answer, according to scientists, is attributed to a genetic mutation or Waardenburg Syndrome (WS), a rare (1/40,000) disease characterized by sensorineural deafness associated with pigment abnormalities and anomalies in neural crest tissue.

However, it is also a historical truth that Africans colonized Europe more than 10,000 years ago and were in fact the first homo sapiens to cross Europe to Asia and the South Pacific.  Could it also be that some blue-eyed blacks may have inherited from their ancient African ancestors and from the whites who crossed paths during Africa’s colonization of Europe?  This question has become more relevant because some children born to both 100% black African parents have “blue eyes”.

This photo is the best example of a black, non mulatto, non albino, blue-eyed African.  In addition, the boy in the photo does not appear to have Waardenberg syndrome, also a source of blue eyes in blacks.  This leaves the strong possibility of a rare mutation of a key eye colour gene. 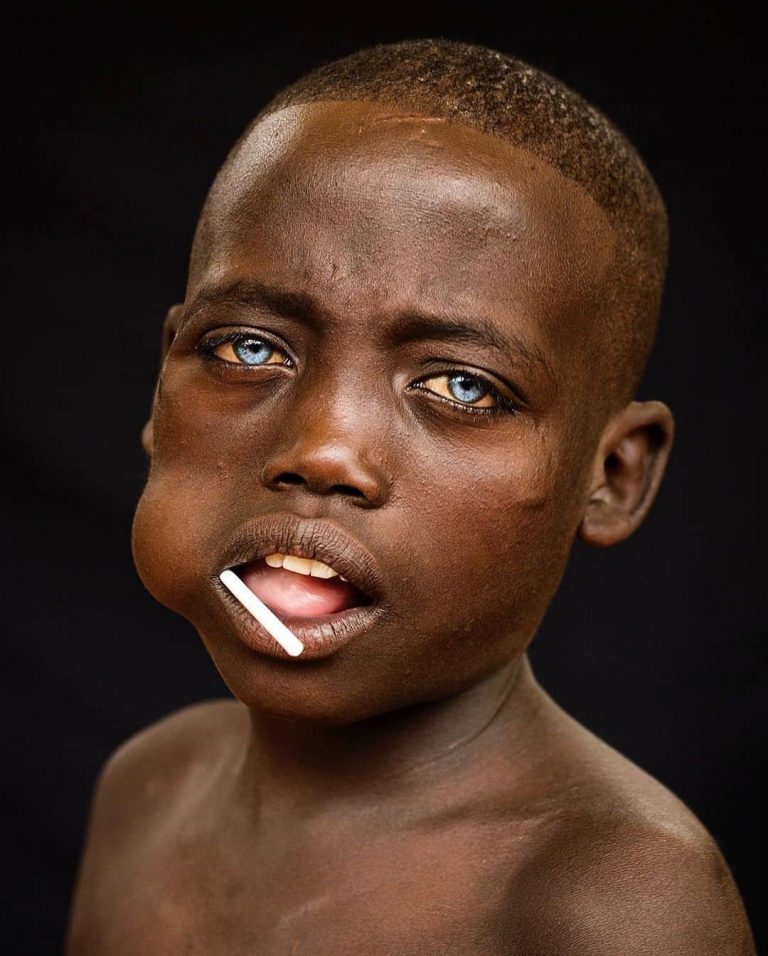 There are four types of Waardenburg syndrome, with a mixture of possible characteristics as a determinant.  The boy in the picture above shows two main symptoms of type 1; bright blue eyes and dystopia canthorum, a condition where the inner corners of the eyes are more widely apart, but with eyes normally spaced apart.

Waardenburg occurs once in 42,000 births and is a disability inherited from a single parent who may or may not have similar characteristics.  With respect to the eye, colour abnormalities come in three forms; heterochromia (multiple colours), bilateral isohypochromia (pale blue eyes), or fundal pigmentary changes.

Thus, in addition to the natural genetic blue eyes in dark-skinned people, as mentioned earlier, Waardenburg’s understanding is another way to accurately recognize the phenotype (gene expression) in eye colour.