Two Dogs has put smile in the face of social media users after a video after they were recorded on camera ‘praying’ before eating their food went viral. 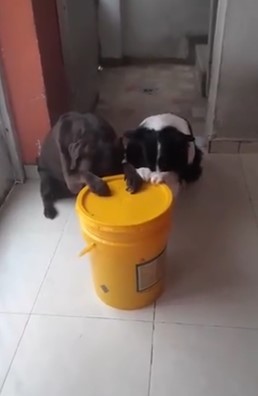 A woman identified as @Avelinacipion take her Twitter page to shared the adorable  video of the dogs ‘praying’ and it immediately went viral.

This is what my dad sends me Lmaoo it’s cute though pic.twitter.com/DnmD8U6XB6

In a video which Went viral, a man believed to own the dogs, served their meals into separate bowls and placed the food container in front of them.

then held on to the food container and bowed their heads in a manner that would suggest they were praying, while the man said the grace in Spanish. As soon as he said Amen, the animals went to feast on the meal.

This is what my dad sends me Lmaoo it’s cute though,” she captioned the clip.