who is ruger girlfriend?. In this Blogpost we will find out who is Ruger Girlfriend.

Michael Adebayo Olayinka popularly known by his stage name as Ruger, is a Nigerian Afrobeat singer and songwriter. Ruger came into lime-light 2021 after he signed a record deal with D’Prince “Jonzing world record.

ALSO READ: Is Ruger Blind In One Eye: What Happened To Ruger’s Eye?

who is ruger girlfriend

Recall that the ‘Dior’ crooner was dragged to filth by online in-laws for tagging Susan, his best friend, during a recent interview.

In response to claims that the two were dating after Loved-up videos and photos of them appeared online, Ruger said that they are only friends in an interview on Clout Africa’s Clout Talk Concert 2.0.

During the interview, Ruger debunked dating rumors with the actress by saying…

“Susan has always been my best friend, she’s my bestie, that’s all I can say about that”

However, taking to his Insta-stories amid the uproar the “Dior” crooner has now admitted that ‘The Johnsons’ star is his girlfriend.

In his words, he wrote: 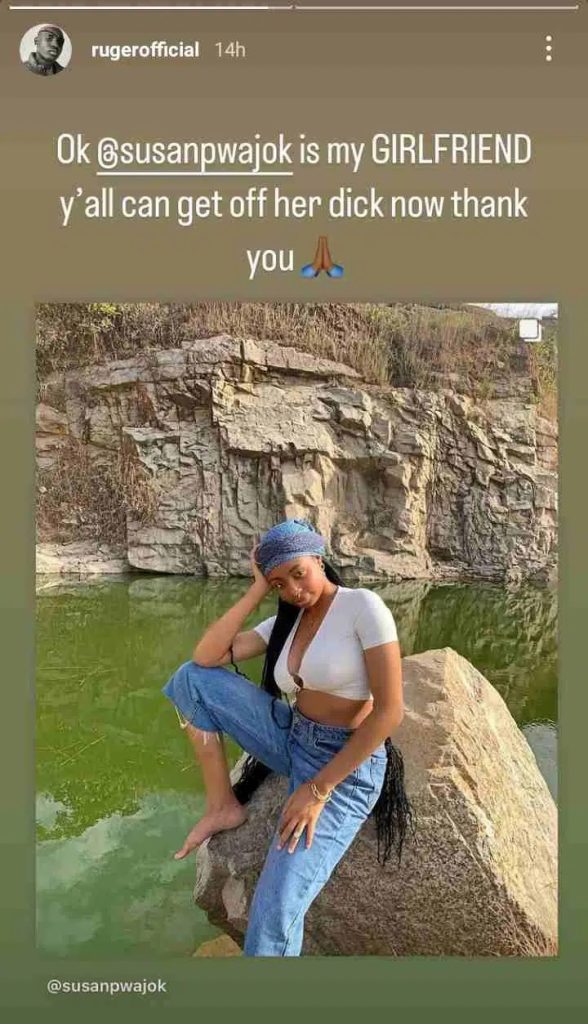 “Ok, @susanpwajok is my girlfriend y’all can get off her dick now thank you,”

Susan Pwajok, mostly known for her role in “The Johnsons” also took to her social media page to share a short video of her loved-up moments with Ruger, confirming previous reports that the two are dating.

Watch the the video below;